The Linux problem determination tools and facilities are free, which begs the question: Why not install them? Without these tools, a simple problem can turn into a long and painful ordeal that can affect a business and/or your personal time. Before reading through the rest of the article, take some time to make sure the following tools are installed on your system(s). These tools are just waiting to make your life easier and/or your business more productive.

Lets see how to utilize them in a problem situation. Those are Linux problem determination tools

Strace is a debugging tool that will help you troubleshoot issues.

Strace monitors the system calls and signals of a specific program. It is helpful when you do not have the source code and would like to debug the execution of a program. strace provides you the execution sequence of a binary from start to end.

Trace the Execution of an Executable

You can use strace command to trace the execution of any executable. The following example shows the output of strace for the Linux mkdir command.

Be default, strace displays all system calls for the given executable. To display only a specific system call, use the strace -e option as shown below.

If you want to trace multiple system calls use the “-e trace=” option. The following example displays both open and read system calls.

Save the Trace Execution to a File Using Option -o

The following examples stores the strace output to output.txt file.

To print the time stamp for each strace output line, use the option -t as shown below.

It traces the calls to the library function. It executes the program in that process.

The output is shown below.

You can observe that there is a set of calls to getutxent and its family of library function. You can also note that ltrace gives the results in the order the functions are called in the program.

Now we know that ‘w’ command works by calling the getutxent and its family of function to get the logged in users.
Using ltrace

One does NOT need any root privileges to run ltrace.

Now we know how to use ltrace for debugging applications. For more better intricate functionalities like breakpoints, stepping through, etc use GDB. However, most of the bugs can be resolved using ltrace/strace by knowing and analyzing the calls and their success and failure errors.

It is easy to remember lsof command if you think of it as “ls + of”, where ls stands for list, and of stands for open files.

Simply typing lsof will provide a list of all open files belonging to all active processes.

By default One file per line is displayed. Most of the columns are self explanatory. We will explain the details about couple of cryptic columns (FD and TYPE).

FD – stands for File descriptor and may seen some of the values as:

Also in FD column numbers like 1u is actual file descriptor and followed by u,r,w of it’s mode as:

TYPE – of files and it’s identification.

To list all the running process of open files of TCP Port ranges from 1-1024.

Here, we have excluded root user. You can exclude a particular user using ‘^’ with command as shown above.

In this example, it will show information like tasks, memory, cpu and swap. Press ‘q‘ to quit window.

you can see more detailed information how much memory is used by which process.

Before beginning with examples, lets understand the concept on which traceroute works.

Traceroute utility uses the TTL field in the IP header to achieve its operation. For users who are new to TTL field, this field describes how much hops a particular packet will take while traveling on network.

So, this effectively outlines the lifetime of the packet on network. This field is usually set to 32 or 64. Each time the packet is held on an intermediate router, it decreases the TTL value by 1. When a router finds the TTL value of 1 in a received packet then that packet is not forwarded but instead discarded.

After discarding the packet, router sends an ICMP error message of “Time exceeded” back to the source from where packet generated. The ICMP packet that is sent back contains the IP address of the router.

So now it can be easily understood that traceroute operates by sending packets with TTL value starting from 1 and then incrementing by one each time. Each time a router receives the packet, it checks the TTL field, if TTL field is 1 then it discards the packet and sends the ICMP error packet containing its IP address and this is what traceroute requires. So traceroute incrementally fetches the IP of all the routers  between the source and the destination.

You should also understand the IP header fields that we discussed a while back.
Traceroute Examples

1. How to run traceroute?

traceroute – print the route packets trace to network host. traceroute  tracks  the route packets taken from an IP network on their way to a given host. It utilizes the IP protocol’s time to live (TTL) field and attempts to elicit an ICMP TIME_EXCEEDED response from each gateway along the path to the host.

traceroute6 is equivalent to traceroute -6

The only required parameter is the name or IP address of the destination host .  The optional packet_len`gth is  the  total  size  of  the  probing packet (default 60 bytes for IPv4 and 80 for IPv6). The specified size can be ignored in some situations or increased up to a minimal value.

This program attempts to trace the route an IP packet would follow to some internet host by launching probe packets with a small ttl (time to live) then listening for an ICMP “time exceeded” reply from a gateway.  We start our probes with a ttl of one and increase by one until we  get  an  ICMP “port  unreachable”  (or TCP reset), which means we got to the “host”, or hit a max (which defaults to 30 hops). Three probes (by default) are sent at each ttl setting and a line is printed showing the ttl, address of the gateway and round trip time of each probe. The address can be followed by additional  information  when  requested.

As you already know, ping command is used to find out whether the peer host/gateway is reachable.

If you are thinking ping is such a simple command and why do I need examples, you should read the rest of the article.

Ping command provides lot more options than what you might already know.

Increase or Decrease the Time Interval Between Packets

Note: Only super user can specify interval less than 0.2 seconds. If not, you’ll get the following error message.

Check whether the local network interface is up and running

Audible ping:  Give beep when the peer is reachable

This option is useful for sysadmin during troubleshooting. There is no need for you to look at the ping output after each and every change. You can continue working with your changes, and when the remote machine become reachable you’ll hear the beep automatically. 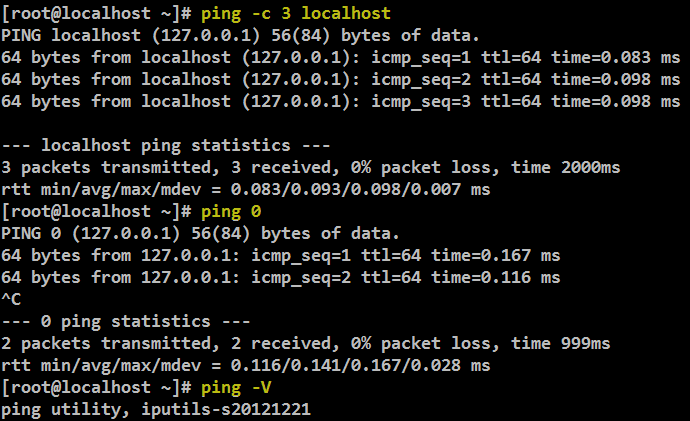 Ethereal is available for a wide range of platforms, including Linux, Windows, and several UNIX platforms. Although Ethereal has a command-line interface, it requires that GTK+ be installed on the system on which it is being built. Ethereal also relies on libpcap. I’ll build it from source on Linux in this section. However, when you install it, it is important to ensure that you have Ethereal and the two software packages that it relies on.

Tcpdump is a most powerful and widely used command-line packets sniffer or package analyzer tool which is used to capture or filter TCP/IP packets that received or transferred over a network on a specific interface. It is available under most of the Linux/Unix based operating systems.

tcpdump also gives us a option to save captured packets in a file for future analysis. It saves the file in a pcap format, that can be viewed by tcpdump command or a open source GUI based tool called Wireshark (Network Protocol Analyzier) that reads tcpdump pcap format files.

How to Install tcpdump in Linux

Many of Linux distributions already shipped with tcpdump tool, if in case you don’t have it on systems, you can install it using following Yum command.

Once tcpdump tool is installed on systems, you can continue to browse following commands with their examples.

Capture Only N Number of Packets

When you run tcpdump command it will capture all the packets for specified interface, until you Hit cancel button. But using -c option, you can capture specified number of packets. The below example will only capture 6 packets.

The below tcpdump command with option -A displays the package in ASCII format. It is a character-encoding scheme format.

To list number of available interfaces on the system, run the following command with -D option.

GDB offers a big list of commands, however the following commands are the ones used most frequently

GDB can do four main kinds of things (plus other things in support of these) to help you catch bugs in the act:

·   Start your program, specifying anything that might affect its behavior.
·   Make your program stop on specified conditions.
·   Examine what has happened, when your program has stopped.
·   Change things in your program, so you can experiment with correcting the effects of one bug and go on to learn about another.

How to use GDB program

You can use GDB to debug programs written in C, C@t{++}, Fortran and Modula-2.

The produced binary will be our examination target. Let’s start with the content of the ELF header:

What does this header tell us?

All of the above Linux problem determination tools / commands are used to troubleshoot a problem in deep dive.