As a Administrator we have to know Linux boot process which help us to troubleshoot if Linux server struck up in booting. In new version of Linux like RHEL 7 / Centos 7 / Fedora 24 Linux Boot process made very faster compare to old versions. New version of Linux includes systemd which is replacement for Init.

Systemd is introduced as a first modification still it support init scripts as backward compatibility symbolic link from /sbin/init –> /usr/lib/systemd/systemd. 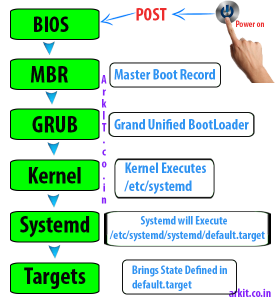 When you press on power on button SMPS (switch mode power supply) will get an signal to power on, immediate after it PGS (Power on boot signal) will execute to get power to all components.

(Power-on-Self-Test) is diagnostic testing sequence all the computer parts will diagnose there own. 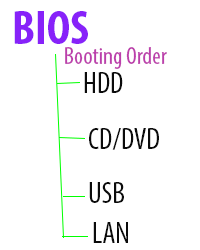 Basically initramfs will load block device drivers such as SATA, RAID .. Etc. The initramfs is bound to the kernel and the kernel mounts this initramfs as part of a two-stage boot process.

After that, the systemd process takes over to initialize the system and start all the system services. How systemd will start.

As we know before systemd there is no process / service exists. Systemd will be started by a system call fork( ); fork system call have an option to specify PID, that why systemd always hold PID 1.

Your User interface start and prompt you for credential to login.

Below are the commands to know time of booting process taken

Thanks for the Read.

Please do comment your feedback which is more important to us.