While Writing Shell Scripts very important is keeping quotes without missing them. Using quotes simple but when to use and where to use will make the good step. In this Article, We are going to see Shell Scripting Tutorial Quotes Double, Single and Reverse Quote. 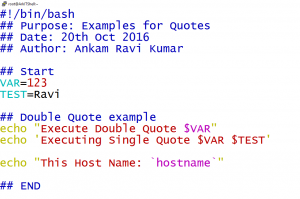 After executing written script is given output as above. As per the above output, Double quote is executed Variable values well. Single quote example printed as it is without variable values. Reverse quote executed command hostname within quotes.

That’s it for this article.

Choose quote type carefully where you want to use. Do not miss open and close quotes.