Unlike the water bottle, zones are logical. You cannot physically walk up to a zone and see it with your natural eye. A zone is a restriction, a limitation, or an access gateway. It’s like trying to pass the security gate without a badge or key. Why are zones needed? What’s the big idea? The whole purpose of a zone is for a server to connect and communicate with its storage devices without having any outside interference from other servers; unless the two servers are clustered in some sort of fashion. Back to the bottle of water now — you need water and a bottle cap in order to have a full glass of water, right? Same here. You need an HBA (host-bus adapter) and storage array port to zone together. An HBA, in simple terms, is a NIC for a server that is plugged into a storage switch and when the port is enabled, it goes from a normal G-port to an F-port (Fabric-attached).

Without the use of zones, a server cannot see storage devices on an array. Yes, the array is connected to the switch and HBA is plugged into the switch. Yet, they still need a way to communicate with each other. This is where hard zoning and soft zoning comes into play. Throughout my experience, I have seen more soft zoning than hard zoning, but there are certain circumstances that calls for it. Back to the water bottle! What will happen if you were to fill up a water bottle, not put the cap on it, and keep filling it up? It would overflow! If you wanted to take some water out of the water bottle and you left the cap on, would you be able to do this? No; unless you poked a hole in the bottle. 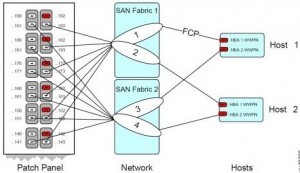 In a nutshell, hard zoning is simply saying — whatever switch port the HBA is plugged into, you MUST use that switch port as a zone member. Soft zoning gives you more flexibility. I could get a server administrator to plug a port into fc2/3 on a Cisco switch and have the HBA turned online. Under soft zoning, I could zone to another port on the switch and the HBA on that switch as well as the one on port fc2/3 would be able to talk to one another. Under hard zoning, I can only zone to fc2/3 port. Why does it matter? Here’s why?

Let’s say the switch port failed and the vendor came back to state that the HBA needs to be moved because the port is no longer in good working condition. If the HBA is removed and placed into another port, the host won’t be able to access their storage. Another example would be a field engineer placing the wrong HBA in a switch port. The host defined by that HBA would be able to access the storage of the zoned server. Many corporations fear hard zoning, but depending on the security of storage and business needs, it’s much safer and protected than soft zoning.

How to do Zoning in Brocade SAN Switch See Here